A Basic Guide To Successful Newsjacking

What exactly is Newsjacking?

The term Newsjacking was established by David Meerman Scott in 2011, he describes it as “The act of leveraging breaking news to draw eyes to your organisation and cause”. 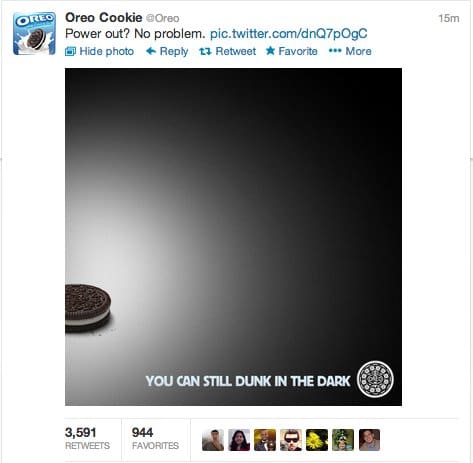 While newsjacking has been popular for a number of years, it has only recently become a reintroduced itself as valuable marketing trend and something that is being used as part of Search Engine Optimisation (SEO). An early example of Newsjacking was executed perfectly by Oreo during a power cut at the 2013 Super Bowl, they tweeted an Oreo image with the hashtag, “you can still dunk in the dark”.

They had run a commercial during the programme, as a result of this Newsjacking tweet they received thousands of likes and retweets within 15 minutes of it going live. As you can see from this example, newsjacking isn’t something new but it remains a very effective way of getting your brand noticed. The essence of it being to target trending news topics that are catching public interest and make it relevant to your brand. Newsjacking is definitely an SEO technique that has traction when it’s done right.

Well it’s simple, news is breaking all over the world every few seconds, all you have to do is turn these popular news items in such a way as to advertise your business. It is important to realise that the news event doesn’t have to have an obvious point of relevance to your business. A great example of this was when Petcentric purposely news jacked the Oscars, they tweeted a photo of a cat with the hashtag “making an ad during the awards, oh the heck with it, CATS”

Although there was no direct link to their business the tweet was an instant success.

In an age where people have access to news 24/7, many are alerted the moment a new story breaks. Most people have instant access to news feeds on their mobile phones and can also receive notifications from Facebook, Twitter and other social networks. Can newsjacking be effective? The answer is yes it can.

There is a golden rule though; for it to be effective it has to be todays news, preferably something released within minutes of the news breaking. This brings its own set of problems as keeping abreast of the current news can be time consuming and costly, which may mean employing someone to find and then publish your news jacked content. The bottom line though is that in the media hungry world we live in there is lots of room for marketers to place their goods and services between the latest hot news topics and the viral traffic that news creates.

Related: Online Marketing is More Important Than Ever And Here’s Why

Is it worth it?

Taking these findings into account, can any of these be truly considered to be a failure?

Newsjacking gives you the opportunity to put your brand out there, it’s tough to get the edge on your competitors. Timely and cleverly thought out newsjacking can give your brand that edge, as has been proven time and time over.

How to newsjack effectively?

This may sound obvious but, know your audience. Newsjacking is all about capitalising on a breaking story in order to expand your company’s reach. Keep an eager eye on the news, if you want your content marketing to stand out you have to be on topic. You should also set up Google Alerts for keywords and phrases associated to your brand or service.

Be quick out of the blocks, if your line of business is the same as many others you need to newsjack on the back of the latest breaking news in a timely fashion. Be critical once you’ve identified a story to newsjack, take a stance that makes you stand out from the crowd.  However, be careful not to choose news items that could have a negative impact on your brand, people don’t like downbeat news. Answer questions, newsjacking gives a perfect platform to answer questions that people outside your industry may not know. Go easy on the hashtags, only use them if the news story is relevant to your business, it just looks wrong if you try to piggyback something that’s not relevant.

Lastly, keep it simple and stay on brand.

For newsjacking posts it is essential to adopt SEO best practices. Make sure your content is easy to read and understand. To make the most of Google ensure that you use your keyword in the title of your blog and in the body of the text. In order to hit that top spot with Google you will need to do some keyword research and optimise your content.

Newsjacking is time critical. The longer you take to formulate your ideas the less impact your campaign will have. If another business beats you to the punch then it’s already too late. It’s only ever the first business to do something that reaps the reward. As soon as someone does it once, it’s old news. Game over.

Be creative with your writing and make it easy to read and understand, remember not everyone knows the finer detail of your brand or service.

Once you have finalised your idea, it’s time to publish it. If you’ve written a blog then make sure it goes out on your social media platforms. If the news story remains in the headlines be prepared to add content to your story if it can deliver more for you.

Newsjacking has proven to be a highly successful tool to improve brand awareness and company growth. In conjunction with well structured SEO it can be of enormous benefit to your brand. Carefully pick your news story and try to avoid ones that have a negative impact. Remember people want a happy ending.

To start your SEO strategy, head to our website today. If you have found this blog helpful, you may wish to read our previous blog on The Importance Of Local Digital Marketing.